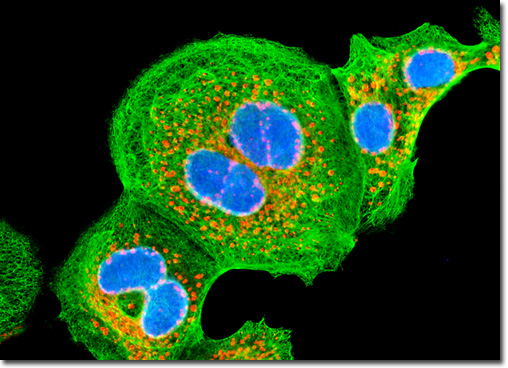 charge which have been used for many years as dyes in life science. Since the Cy3, Cy5 and Cy7 were made commercially available as succinimidyl esters in the early 1990s, cyanine dyes began to be used widely as labels for nucleic acids. Because of the good properties of low non-specific binding to biomolecules and bright fluorescence owing to their huge extinction coefficients and good quantum yields, the Cy dyes have been widespread used in DNA and RNA labelling. Cyanine dyes can be divided into two groups based on water solubility: non-sulfonated cyanines and sulfonated cyanines.

Non-sulfonated cyanines
Available non-sulfonated dyes include Cy3, Cy3.5, Cy5, Cy5.5, Cy7, and Cy7.5. Cy stands for 'cyanine', and the first digit identifies the number of carbon atoms between the indolenine groups. The suffix .5 is added for benzo-fused cyanines. Most derivatives of non-sulfonated cyanines have low aqueous solubility except for hydrochlorides of hydrazides and amines. They are organic co-solvent soluble (5-20% of DMF or DMSO). When these molecules are used for biomolecule labeling, they should be dissolved in organic solvent first, and added to a solution of biomolecule (protein, peptide, amino-labeled DNA) in appropriate aqueous buffer. Fluorescent properties of non-sulfonated cyanines have little dependence on solvent and surrounding.